We all know that the National Bureau of Investigation (NBI) clearance tells if there have been criminal cases documented in the courts of the Philippines against the person.

Its degree is not restricted to just a certain territory; it covers the whole Philippines. 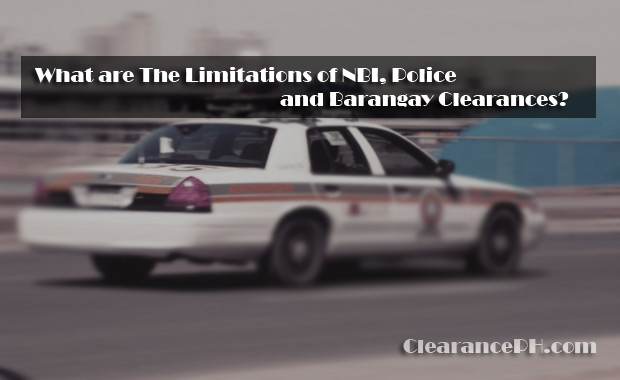 Despite the high credibility of NBI clearance, there’s a limitation in it. It can’t tell if there have been civil cases which are already filed against the person.

Additionally, in some cases where the criminal case is still with the prosecutor or the police or the NBI agents, you will see nothing in the NBI Clearance. That implies that the person is still cleared from any cases. A criminal case goes thru numerous procedures before it gets recorded in court, keep in mind that if the case is still at these stages it won’t be recorded in the NBI Clearance.

The police clearance has no ability to tell if there are criminal cases recorded against the person in different areas in the Philippines.

It’s the same as the NBI Clearance. One cannot detect if there are criminal cases filed for a certain person.

With a Barangay Clearance, one can tell if the person has cases filed just within the barangay. But then the extent of the barangay clearance is constrained just to a certain barangay; it doesn’t cover different barangays in the Philippines.

The barangay freedom will not be able to tell if there are cases filed against the person all throughout the country, just from that certain barangay.